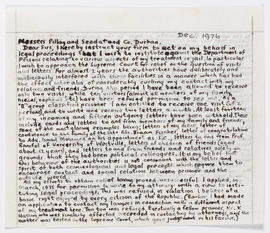 Immediate source of acquisition or transfer

This item consists of a letter written by Ahmed Kathrada to the legal firm of Seedat Pillay & Co. that was smuggled out of Robben Island Prison. Kathrada wished to appoint the firm to act on his behalf in legal proceedings against the Department of Prisons. Since the authorities refused to allow him contact with his attorneys, he had to use this "illegal" method to seek legal representation.

Access by permission of the Nelson Mandela Centre of Memory

Copyright held by the Nelson Mandela Centre of Memory

Existence and location of originals

Existence and location of copies

Kathy smuggled letter
Dec. 1976
Messers Pillay and Seedat and Co. Durban
Dear Sirs,
I hereby instruct your firm to act on my behalf in legal proceedings that I wish to institute against the Department of Prisons relating to various aspects of my treatment in jail. In particular I wish to approach the Supreme Court for relief on the question of visits and letters. For almost 2 years the authorities have deliberately and maliciously interfered with these facilities in a manner which has had the effect, inter alia, of considerably curbing my contact with my relatives and friends. During this period I have been allowed to receive only two visits, while ten visitors (almost all members of my family, nieces, nephews etc) have been refused permission to see me. As a “B” group classified prisoner I am entitled to receive one visit (of 2 persons), and to write and receive two letters a month. At least fourteen of my incoming and fifteen outgoing letters have been withheld. These include cards and letters to and from members of my family and friends, some of the most glaring examples being: letters of my niece, letter of condolence to the family of the late Adv.[advocate] Braam [Bram] Fischer, letter of congratulations to Adv. Ismail Mohamed on his appointment as S.C., letters to and from Prof. Ramfol of University of Westville, letters of children of friends (aged about 12 years), and letters to and from friends and relatives, solely on grounds that they had been political colleagues. It is my belief that this behaviour of the authorities is not consonant with the letter and spirit of both criminological and legal precepts which require them to encourage contact and social relations between prisoner and the outside world.
All my efforts to obtain relief having proved unsuccessful I applied in March, 1975 for permission to write to my attorneys with a view to instituting legal proceedings. This was refused, in violation I believe of a basic right enjoyed by every citizen of the Republic. (Earlier, I had made an application to contact my lawyers in connection with a different aspect of my treatment here. This too was refused. Eventually, a fellow prisoner, Mr. K Hassim, who was similarly affected, succeeded in contacting his attorneys, and the matter was tested in the Supreme Court, which gave judgement in his favour.)