Collection by Leo Marquand include statement made in court by Nelson Mandela from The observer and a statement made by Bram Fischer from the UN general assembly.

World Campaign for the Release of South African Political Prisoner

Newspaper articles from The Irish Times, The Guardian, New York Herald Tribune reporting on the Rivonia or sabotage trial of 1962-1964. Includes newspaper clippings on the raids, the death and burial of Albert Luthuli in 1967.

The personal papers of Ruth First
The collection is made up of background material, correspondence and reviews concerning "No Easy Walk to Freedom" edited by Ruth First. Printed copies of Nelson Mandela’s speech at the Rivonia Trial. Drafts of sections of the book, and a typescript of Mary Benson’s statement before the UN Special Committee on Apartheid in 1964, with handwritten alterations. Correspondence, mainly between Ruth First and Heinemann Publishers, as well as clippings of newspaper reviews.
Material on political detention between 1963 and 1970, including a copy of the 1963 Detention Act, a radio script by Mary Benson entitled "Nelson Mandela and the Rivonia Trial," and notes produced by Ruth First. Press releases and conference papers concerning the Symposium on the exploitation of Blacks in South Africa and Namibia, organized by the United Nations in 1978, with observances of the 60th birthday of Nelson Mandela.
Transcripts of interviews with Robben Island political prisoners. Correspondence from friends and acquaintances, and materials from South African newspapers concerning the Rivonia Trial.

Collection of materials including:
News clippings on the situation in South Africa in 1991 regarding, among others, ANC National working committee nominations, reports of spies within the ANC. Discussion document on structures and principles of a constitution for a Democratic South Africa. Press statements by the ANC. Statements by Nelson Mandela and Oliver Tambo during an ANC national conference held between second and 7th July 1991 in Durban, South Africa. ANC resolutions on various issues including strategy and tactics, building the ANC, violence, negotiations, and foreign policy. Correspondence with Jennifer Davis of the Africa Fund.

Nelson Mandela and the Singer Bono in Cape Town. Bono signed and wrote a message for Mandela on the back of the frame.

Nelson Mandela looking through bars, a candle burning next to him. The inscription reads: To Madiba, Richard Loming & Debbie B. framed.

Compilation of clips on the life of Nelson Mandela from 8 segments from Segment 1 to 7; 7b Gala; end credits.

Video on Nelson Mandela receiving his prison personal notebooks back from the warder. The notebooks were lost during a raid in Robben Island.

Proceedings of the FIFA press conference held at the Nelson Mandela Foundation with Tim Modise, Tokyo Sexwale, Danny Jordaan, and Jomo Sono. The press conference announces the FIFA campaign against racism such as Say No to racism and to celebrate Nelson Mandela's forthcoming 90th birthday in 2018. The game is to be held at New lands stadium in Cape Town. The match is going to be played by World 11 versus Africa 11.

Various income and expenditure receipts and reconciliation sheets for Mandela

Electronic files (MS Word - converted to PDF and jpeg) of Nelson Mandela's original autobiography written on Robben Island. It covers his life story from birth to about 1976. It was intended that the manuscript be published to mark Mr Mandela's 60th birthday in 1978 and help draw attention to the freedom struggle. The ANC leadership decided not to publish it. It later formed the basis for Mr Mandela's autobiography "Long Walk to Freedom".

Correspondence, memoranda, newsletters, pamphlets, reports, publications and other campaign materials concerning:
The World Campaign for the Release of South African Political Prisoners (1964 - 1967). The Rivonia Trial, and a call to save South Africa's resistance leaders, including Nelson Mandela, from the death penalty. Nelson Mandela's statement from the dock at the Rivonia Trial, translated into Norwegian.
Amnesty International reports on prison conditions in South Africa (1965).

Files of the United Nations (UN) Secretary-General, U Thant, include:
Text of a statement by Achkar Marot, the representative of Guinea, to the UN, refers to Nelson Mandela's imprisonment on Robben Island. Response by the South African government to two articles published in the "UN Monthly Chronicle," which discusses the South African government's position on the Rivonia Trial, including Nelson Mandela's statement from the dock. The conclusion and recommendations of the International Seminar on Apartheid, Racial Discrimination and Colonialism in Southern Africa held in Kitwe, Zambia (1967). The conference recommended special campaigns around the incarceration of outstanding leaders such as Nelson Mandela, Walter Sisulu, Robert Sobukwe and Bram Fischer.

Programmes and programme segments broadcast on channels such as NBC, CNN and ABC. Includes footage and reports on sporting events and occasions:
Nelson Mandela's return to Robben Island for the Olympic torch relay (2004). Nelson Mandela's being called to testify in court concerning allegations of racism and corruption in the South African Rugby Football Union (1998). Mandela's support for the Cape Town Olympic Bid (2004). Scenes from South Africa's hosting of the 1996 rugby world cup, and Nelson Mandela's welcome to participating countries. Scenes of Nelson Mandela and Fidel Castro at the 1992 Olympic games.

Records of the Rivonia Treason Trial

Purchased from Microfile, Johannesburg. Records of the State vs. Nelson Mandela and nine others. Includes indictments, addresses, evidence and other trial records. Incomplete. There is no inventory so it is unclear which trial records are missing. 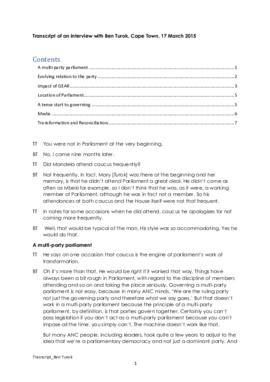 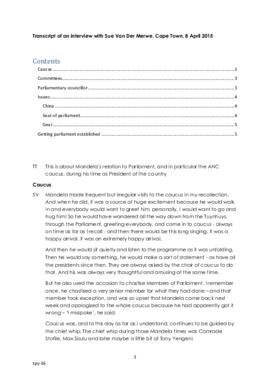 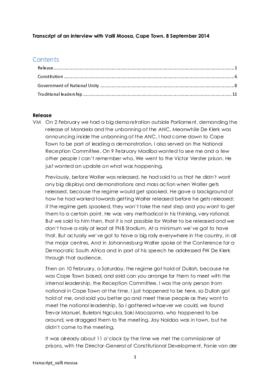 Side by side : The autobiography of Helen Joseph

If this be treason

This collection is made up of all the videos. audio and photographic material from the 46664 campaigns, concerts and birthday messages to Nelson Mandela. The first concert was held at Green Point Stadium in Cape Town, South Africa on the 23 of November 2003. The second concert was held at Fancourt country club and golf estate in George, Western Cape, South Africa on the the third was a two day Festival in Spain Madrid The fourth one was held in London Hyde Park in 2008, In the 2009 the concert was held at the Radio city hall in New York . The celebration included Nelson Mandela's birthday celebration and the launch of the international Mandela day as July the 18th was recognised as a day dedicated to serve others in one community.
.

This item consists of a series of the 46664 HIV/AIDS campaigns and concerts held from 2003 up to 2008. The first concert was held in Cape Town, followed by the one in George, the next was held Tromso, Spain, then Hyde Park, London, this was followed by the Johannesburg one and then the last one was held in New York. The performance was by the South African and the international artists from all performing from the year 2003 up to 2008.

"The concert" was the first 46664 concert, this was held in Greenpoint stadium Cape Town, South Africa. Recorded from videotapes from 46664/1 to videotape 46664/55. The videotapes are in folders 1 and 2. Each videotape is recorded in three formats. The first format being the use copy MP4. format followed by the MOV. format which has a higher quality followed by the MXF which is broadcast quality. The reason for this is to provide for use copies and also to provide for broadcast quality whenever it is needed.

46664 HIV/AIDS campaign concert, held in 2003 at Green Point Stadium in Cape Town, South Africa. All the performing artists gathered on stage singing together ''its a long walk to freedom-46664'', and the crowd waving hands.

46664 concert held in Green Point Stadium, Cape Town on the 29th of November 2003. Beyonce Knowles in collaboration with the edge and Bono, Nelson Mandela addressing the audience, and many more performances by a variety of artists, including Yvonne Chakachaka, Bongo Maffin, Johnny Clegg, among athers.

This item consists of the 46664 HIV/AIDS campaign concert, held in 2003 at Green Point Stadium in Cape Town, South Africa. All the artists gathered on stage singing ''Nelson Mandela-46664'', waving hands.